In her acceptance speech for her Best Actress award at the 2018 Oscars, Frances McDormand caused a stir by calling on actors of all genders to request “inclusivity riders”. An inclusivity rider is a clause included in an actor’s contract, whereby they can demand a certain level of representation among casts and crews on the film they are signing up to. This may be in terms of gender, race, physical or mental ability, or could refer to those who identify with different sexual orientations.

McDormand was supported by fellow actors and industry professionals on social media and her speech was widely praised. If the use of such riders becomes the norm, then the film industry could indeed be on the brink of long overdue change. But for real, long-lasting transformation, changes need to be implemented at the ground level to help aspiring filmmakers and actors – not just the Hollywood elite. In other words, you can’t be inclusive at the top if minorities can’t gain a foothold in the first place.

Women still account for less than 18% of directors, less than 16% of writers, and less than 7% of directors of photography in British film. With a long way to go before the UK industry hits 50/50 parity, why is it that men still dominate this industry?

Additionally, women are more likely to give up on the industry in their thirties, which is a critical point when it comes to moving women into management positions. Research by Directors UK has revealed that women and men enter the industry at the same rate, so women want to be there, they just face more barriers when it comes to having lasting careers. The report summarised that the disparity could be down to factors like “unconscious biases” in hiring (assumptions like the idea that women don’t “want” to make action films, or that men are better suited to working long, unsociable hours) and long-standing systemic sexism (for example, hiring women to direct “women’s” films only).

Add to these factors a working environment that involves long hours, short-term contracts and little sense of job security and you will find a hostile space for working parents. In order to increase the number of women in the industry overall, there need to be more women in high-ranking positions in film. And that means that women need to be supported across their careers from the very beginning – not just when they are finally hired to direct a blockbuster as Patty Jenkins was when her Wonder Woman movie smashed box office records. It did so despite it being Jenkins’ first directorial role since 2003’s Monster.

Add to this that women and minorities on-screen make up far fewer of the speaking roles in films across the board, and we have an industry-wide lack of representation that requires significant action in order to reach a point of parity. 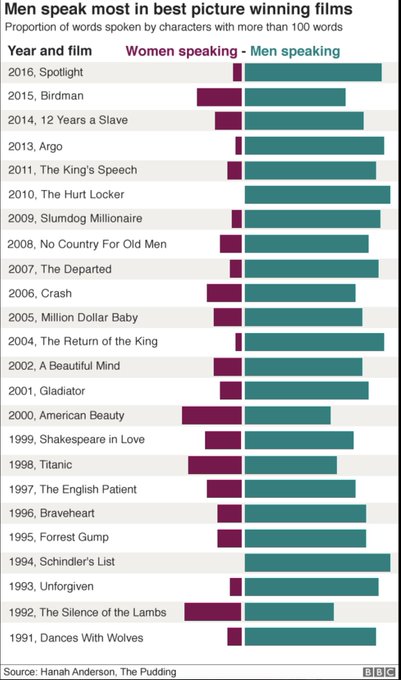 Think about this when the Oscars’ men’s and women’s awards suggest parity of any sort. I’ve seen these numbers, about how speech is apportioned in films, but this chart is really striking. ht @ellentejle

Getting a foot in the door

A report by the Institute for Public Policy Research (IPPR) found that the media was among the top three most difficult industries to enter for new entrants whose families did not have the means to support their unpaid work experience.

The BBC’s Media Editor, Amol Rajan, said in a speech this week that the absence of poor people in broadcasting was “shocking” and pointed to the fact that “the poor have no lobby in broadcasting”. The same could be said in film.

According to the IPPR, film and television were found to represent 8% of the creative industry job market, but 16% of internships advertised. With such a high rate of expectation when it comes to unpaid work, how are those without the safety net of middle-class families to gain the experience required to get that first paid job in media or film?

Studies have also shown that people from minority ethnic backgrounds make up just 3% of the film and television industry’s workforce, but they make up 12.5% of the population in the UK. In an industry where a “culture of nepotism” prevails, and because organisations tend to hire people who are similar to the people who are already on the team, it’s difficult for people from BAME backgrounds to get a foothold.

McDormand’s rousing speech was inspiring and it has given momentum to very important conversations in the film industry worldwide. We can only hope that those with the power to do so may use it to encourage and insist upon diversity in cast and crew.

But if you are in the position to implement change in this way and find it difficult to hire experienced cast and crew members who are not white, male and middle-class it says to me that the problem begins in the lower rungs. That is, that the lack of diversity in the industry is a problem that begins at the ground floor with opportunity – opportunity that is not so readily available to people of colour, to women, to those of differing physical and mental abilities. Basically, those who do not identify as heterosexual, white males.